Here we are already ending the first week of July. The garden is going gangbusters and we’re loving every minute and every morsel. We’ve been enjoying greens since March, peas over the last month and the broccoli has actually gone to seed now. But for me when the root veggies start showing their true selves, I feel summer harvest knocking at the door. These baby carrots and beets are only moments shy of fully maturing. We are devouring the first zucchinis, blissfully ignorant to the idea of the late August green giant overload. We have Green zucchini, Costata Romanescos with the racing stripes, and Scalloped green/yellow pattypans soon to arrive. Unfortunately, I mismarked the yellow crookneck and they seemed to have gotten lost in the shuffle.

I also dug around the bottoms of our potatoes for some “new potatoes”. The clue here is when you see the plants flowering. I’m hoping they didn’t notice and their knobby little roots will continue developing.

The baby cucs are a couple varieties of pickling cucumbers. One, the Parisian Pickler is an overly spiny thing that is more suitable as a cornichon picked small. I’m liking the Fin de Meaux pickler with just a little less spine. Only having a couple plants of each, I won’t be doing mass pickles so I cut them up into pint jars and pour  boiling water and vinegar in… about half and half which can be varied to your personal liking. Then we just throw them in salads and just about everything else as soon as the next day. I’m hot this year for making kimchi. I’ll have another go at sauerkraut too and hopefully will not have to look up ‘maggot’  in the back of Sandor Katz’s The Art of Fermentation

this year (it’s there). Fermenting is so in and rightfully so with it’s numerous health benefits. I might have the good fortune to catch Sandor K. at the Book Larder  and /or Firefly Kitchens in Seattle next week. 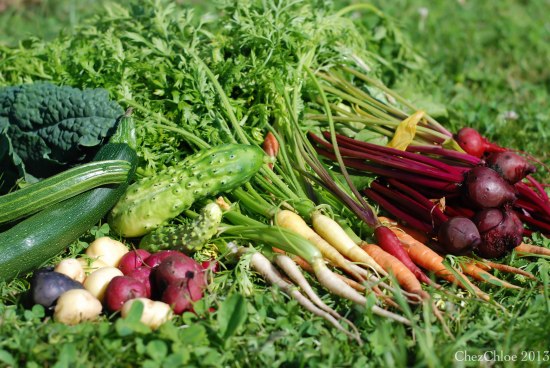 We are eating loads of salads with Lacinato (or dinasaur) kale strips thrown in. It’s dark, rich green, cellulite looking leaf is on the top left .

A little garlic here fresh from the ground. It too, is a few weeks short of maturity but  perfect for sneaking a couple bulbs out early.

Washed veggies on the front porch drenched with light. This photo was only cropped. The color is real.

And on the back patio in the cool light of shade…

Everything was wrapped separately in foil and cooked on the grill. Carrots got a little olive oil and a pinch of sea salt. We have Atomic Red, Lunar White, Amarillo and Nantes. The beets requested only a drizzle of olive oil and sweet balsamic. We’ve got Chiogga (pink and white striped center), Early Wonder, Bulls Blood and a smattering of Golden beets that didn’t germinate so well and aren’t present here. The zucchini went straight on the grill.

And here’s the finished product. Beet greens sauteed with olive and sesame oil and garlic, potatoes, carrots and the beets. All incredibly tender and sweet. 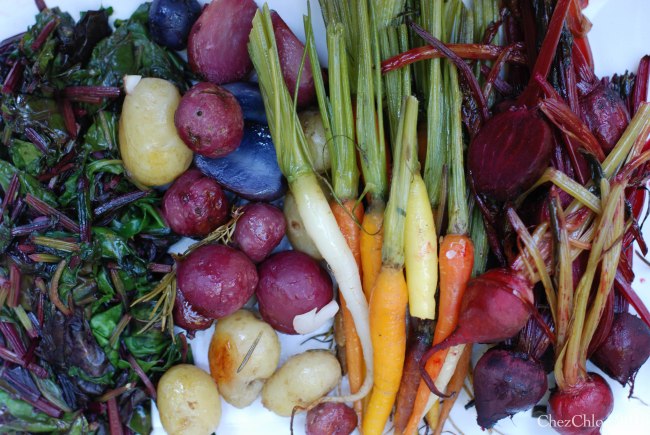 These veggies were served alongside grilled burgers with bacon, cheddar and jalepeño jack and a side of onion jam I recently made. (No Buns in the house as we are on a modified Paleo venture:)

Since I didn’t get any pics of the burgers, I will suggest this roasted chicken in its stead. Both the chicken and beef are from our local Coffelt Farm. I’ve been on a Sumac kick. And threw in some sliced onions,  lemons and kalamata olives.

According to Pensey’s spices  ” The flavor is on the order of lemon juice or vinegar but milder and less acidic.”

Ending with pics from several angles of the garden. I like a tidy garden but am not a true perfectionist or I would have mowed five minutes prior to photos. I’d say we have about 98% heirloom seed.

We’ve got new blueberries on the right. Garlic, peas, brassicas on the left with lettuce, spinach, carrots, beets down the line.

Walking around the left…O’s little patch of corn, a few varieties of beans, basil under the plastic.

On over to the other corner…Gladiolas, sunflowers, squash and artichokes in the mass of green fluff.

Chickens in their favorite spot… the potato tropics with laced carrot umbrellas- they love scratching up all the grass clippings. I only mind a little. I told them not to read this post.

And my first Dahlia’s in years. I’m loving flowers in the garden for cutting and plan on growing more next year.

And Tschüß till next time… xx