For those of you who don’t follow Foodimentary… you should. Then you, too would be reminded of the fact it is Fat Tuesday (party folk), aka Shrove Tuesday (praying folk), aka Pancake Day (foodie folk). Pancakes were made to rid the pantry of the good stuff before Lent. If I was giving it up, I’d better make chocolate chip pancakes with nutella.

Why I didn’t think of it being pancake day is a complete mystery slash senior moment because just yesterday while shopping downtown we were stopped by a TV reporter from RTL. We were just crossing the bridge to the central square at the Rathaus (town hall) when she stopped to ask if we knew what day it was. First rewind about 4½ minutes from that moment, to when I actually saw the man with the big camera and fuzzy microphone and the pretty young lady with flawless makeup and white teeth (yes I could see that 15ft away). I watched them gaging the crowd. I broke out in a cold sweat mixed with fear, excitement and anticipation. As we approached the bridge, I thought, Oh my God, are they going to talk to us, and then there was the unavoidable fact they would be speaking in German. Thank God O was by my side. We casually continued like neither of us noticed we might BE ON TV. Then BAM, this chick was in our face with a microphone two inches away from O’s lips. Maybe I actually looked as nervous on the outside as I was on the inside. Now I’m getting pretty good at understanding German and I have plenty to say that slowly formulates in my head. But usually by the time I’ve finished two German, grammatically correct sentences, the people doing the talking out loud have moved on to another topic. I knew she asked us (O) what day it was…. And No, we (he) didn’t know. Then she went on to say why isn’t anybody dressed up in Hamburg? What’s wrong with this city? O replies with much lovely German that really he’s from central Germany and we are new to Hamburg.  She says. Because hey it’s Karnival! (She too of course said it in German and again of course these were MUCH longer sentences and… it is possible I didn’t get 100% of everything said)

I can’t get one German word out so I’m nodding and smiling. O is chatting cause he’s so good at it having done interviews and such. Our three minutes are over and I sputter out in English, after the microphone is already pointing at  the ground something about “hey you should go to New Orleans if you want to see a party!” Like she couldn’t just head to Cologne or Dusseldorf. Which actually I think she very well did say. But nerves and foreign language comprehension are heavy competitors in the brain. So now I’m like we don’t party or pray but we damn well eat pancakes. 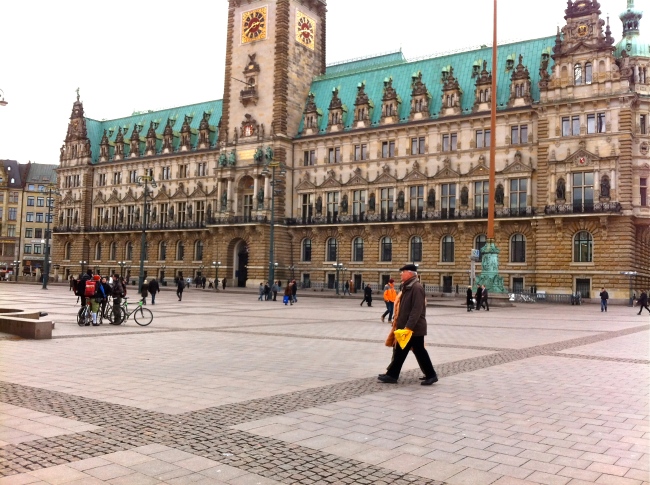 Bridge above the Alster shed where said interview took place… 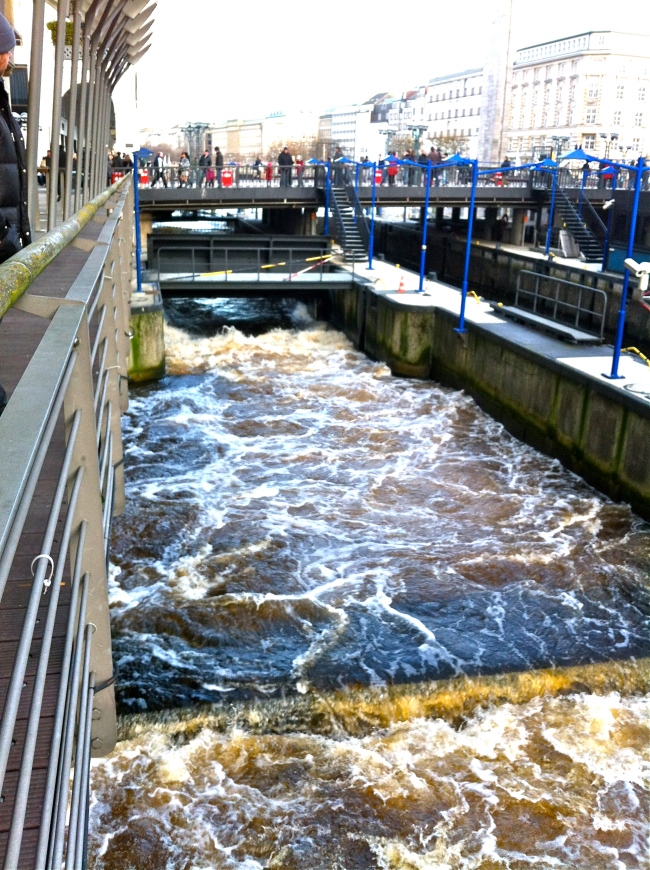 In Germany, I did learn today they celebrate (in some cities at least!) Rose Monday and Shrove Tuesday and then comes Ash Wednesday and the beginning of Lent (ok the last two are everywhere). Here’s a little more info from GoGermany and on RosenMontag (Rose Monday) I’m officially Catholic but haven’t given up anything for Lent in years. My sister gave up FB last year and it just about killed her. Would Jesus want that? (oh no here I go again being potentially offensive… only for the sake of humor!)

The UK is also huge into Pancake Day including parades and many events. Check out London’s Time Out magazine. And how about a few pancake recipes from BBC. Personally, from what I’ve seen… (pretty flat looking pancakes) I think it should be called Crepe Day. But that’s just me.

We will be celebrating with crepes or maybe a Swedish pancake which lies between crepe and fluffy. And we splurged on one ½ pint each of raspberries and strawberries. More for color than taste this time of year. I’ll have to add pictures next time we make crepes/pancakes because it’s already dark here and this has got to get published!