It was either cupfin or muffcake. I just don’t think the latter works. Are you with me? Somehow I don’t think it will be the next “cake pop”

I’ve migrated from the deep philosophical ponderings of the last post. Although maybe these  little bundles of yum might think differently. Maybe they feel a need to explore their various expressions. Am I a muffin? Am I a cupcake? Am I bread? Am I teacake? I digress.

I’ve just spent a few moments trying to learn if there IS a definite distinction between cupcakes and muffins. It was a few moments too many. I have different images and feelings about each more than a concrete verbal definition for them individually or in comparison. Muffins can be healthy if they aren’t wrapped in plastic with an expiration date 18 months out. Cupcakes are for the most part little cakes with frosting. I did like this anonymous quote I found.

As you might have noticed, I make a lot of banana bread/muffins/tea cake. I just love it and so does the family.  And today, well yesterday I threw in three chocolates. White, milk and dark cut up from bars.

Threw in some walnuts too. I also frosted them with cream cheese frosting. So I think they waddled over to the side of cupcake… especially with a few sprinkles on top.

I found the cream cheese frosting a little runny – I’m blaming it on the tubs of cream cheese having a higher water content over here. It was still delicious. I’ve got a pastry bag filled with frosting sitting in the side of the fridge. Very convenient… if I want to gain 5 pounds this weekend.

The recipe is only slightly different from Paula Deen’s banana nut cake recipe. I strayed from Nigella’s this one time just to check out a banana “cake” recipe vs “bread” recipe. Not a lot of difference in my opinion. This recipe made 23 cupcakes… I think I ate the 24th in raw dough. Banana nut bread/cake- whatever… is always really really good a day later. It’s sticky and sweet.

Heading into the oven…

My luck of the Irish appeared when I edited these photos and realized I’d magically picked the green wrapped cupcake and placed it on a green napkin… granted it’s bamboo but let’s not get picky. I had forgotten it was St Patty’s Day weekend. Maybe now I won’t get pinched. 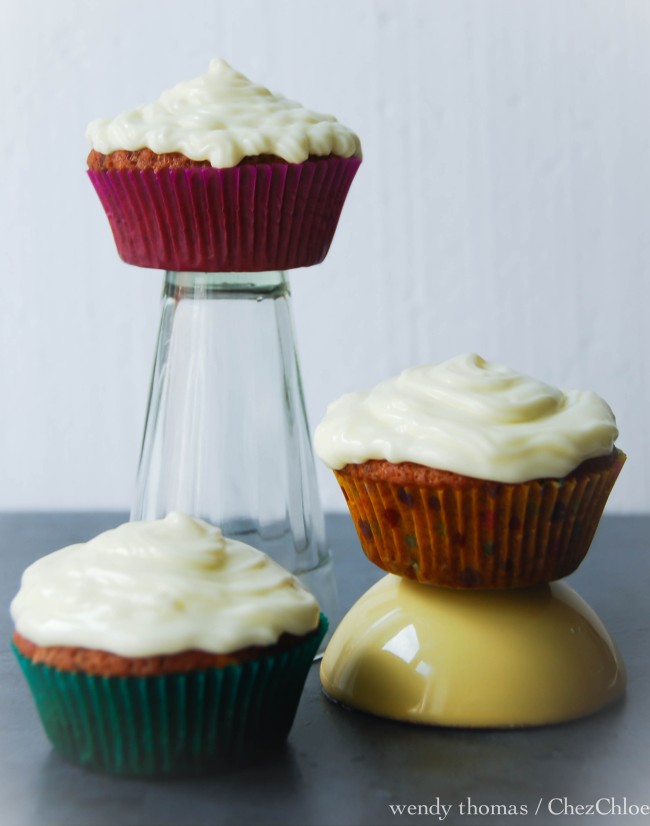