I’d like to introduce you to Frog Song Farm, our summer digs, with a couple of photos I snapped last night. This humble octagonal structure was built by a man child at the age of 24, so the story goes. And it miraculously still stands roughly 30 years later. My first introduction was a description of Frog Song Farm posted on a small blue lined 3×5 index card in the spring of 1993 at the Seattle Tilth office in Good Shepherd’s park. “15 Acre Organic Farm, cabin, mature fruit trees” it read.  I was just finishing my degree at Bastyr College. After my last class, we took a six week journey traveling up the inside passage with a VW bus on a boat, then drove back down through Alaska and the Yukon. It was the moment of our return that I found myself busting to get out of the city. Three weeks later I sat on the lawn outside of a then intact octagonal structure surrounded by a small picket fence smothered with trailing roses. Ripe fruits of mid August swooned me. Laying in the grass, cocked on one elbow twirling grass blades between my fingers, I, also ripe at 25, negotiated with the owner as to how I could make this work. 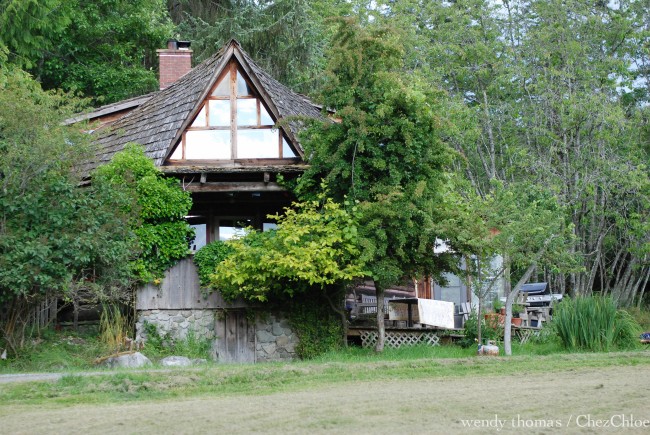 I’m divulging the real sense of this place… gas cans, shredded plastic from the last wind storm dangling off a lichen drenched roof who’s structure is understood by no mortal. Once this place goes down… it goes down. Maybe by the end of the summer we’ll have some “after” pics with a few aesthetically pleasing ‘band-aids’ 🙂 Please remember we’ve only been here a week. So far it’s been pulling out the dishes and dusting.

Here is the porch, where we satisfy our thrill to grill…and if it ever warms up, where we like to entertain friends and ourselves. When we are gifted with dry mornings you’ll find us here with coffee, tea, books, newspapers and muesli…

It is the inside of this cabin that grasps my heartstrings every time I entertain the idea of knocking it down to erect in it’s place a modern, insulated, draft free, rodent free, funk free structure. 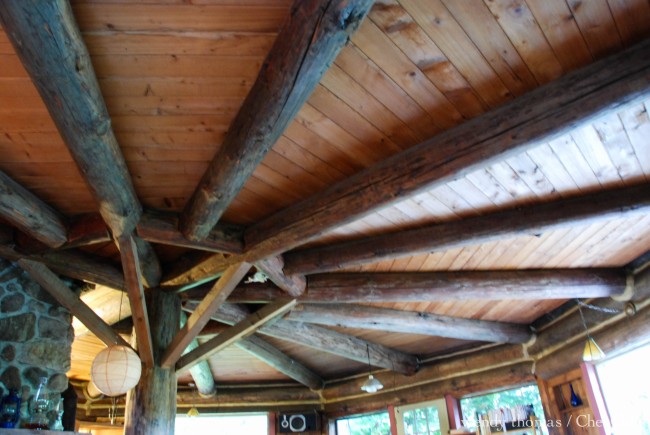 I will admit to updating it ever so slightly with a new flat screen (scary cheap at costco) and oven. I’ve still been cranking the woodstove this last week, as the northwest hasn’t given over to summer just yet. Yes, those are my knees. I have the camera sitting steady on my chest with the ISO at 800 (in retrospect should have cranked it up way higher) and a terribly long shutter speed.

But you get my point (I hope)… it’s just damn cool. And I’ve had two little buddies hanging in the morning and evenings … watching me at the kitchen sink.

On to the menu…

I’m pleased to say the grill has been burned clean, fired up and we are bbq’ing our way into a so far cool (and I mean F°) summer 2012. Nothing like grilling under a light blanket of drizzle. The charm of the Pacific Northwest can be found in it’s tall pines, cedars and here specifically in the San Juan Islands, the waterways of Puget Sound meandering around over 700 islands… not so much in the weather.

I started with this Pasta hoping to get in on the Donna Hay Photo challenge at Junglefrog Cooking But after 3 attempts, we just can’t eat any more pasta, pea and goat cheese salad! Ok, maybe I’ll have one more go as I just turned a 1/2 gal of goat milk into chevre. Please refer to Junglefrog for the recipe originally out of a February Donna Hay magazine. I would beg to differ on the portions. For us, more like eight as a side and six if you really want a BIG bowl of pasta.

Here’s the recipe but head over to Junglefrog if you want to Print. You should go over there anyway because it’s a great site.

Boil up you noodles of choice… regular semolina or one of the many gluten free varieties. The recipe called for Penne but I like the twists… And get yourself some peas! I love using pea shoots for the green and Donna Hay used Arugula. 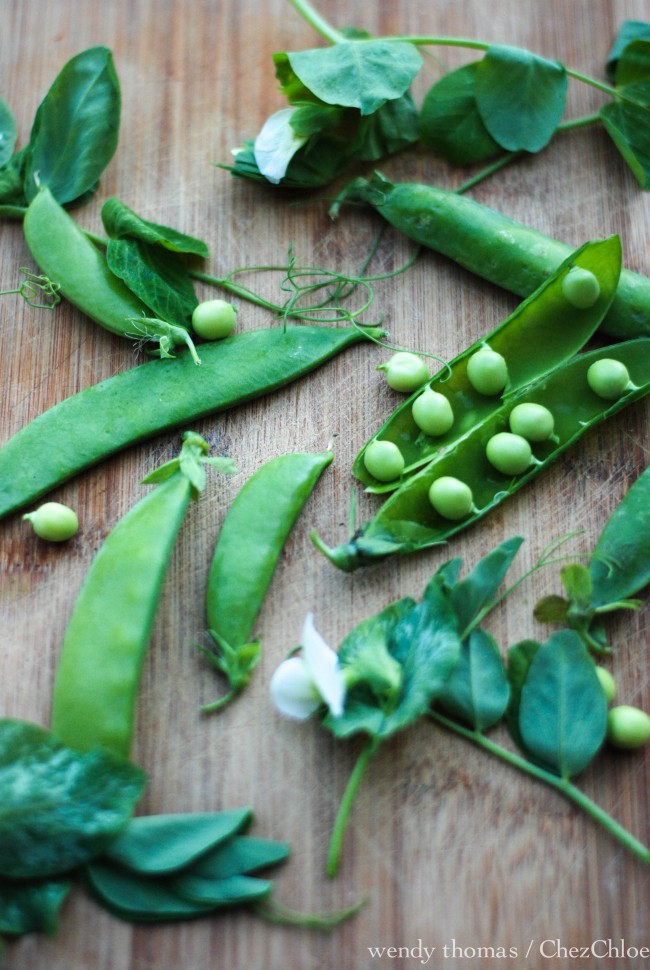 I used fresh shelling peas, snap peas, and pea shoots all from local gardens. I used to love growing pea shoots for salad. You can even do this in a pot of the porch. 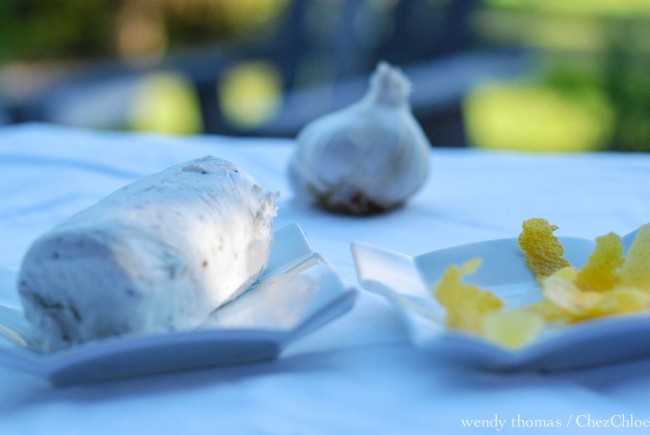 And back to that grill action… two nights in a row we threw filets of local sockeye salmon purchased down the road from Buck Bay Shellfish Farm. With only a little olive oil, Saltworks Yakima applewood smoked salt and lemon slices this fish gleamed with taste and color. 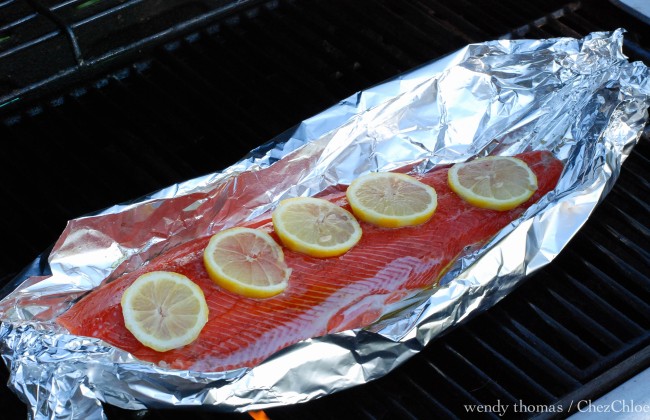 I prefer to wrap it in foil, cook till almost done then turn off the grill to finish cooking. 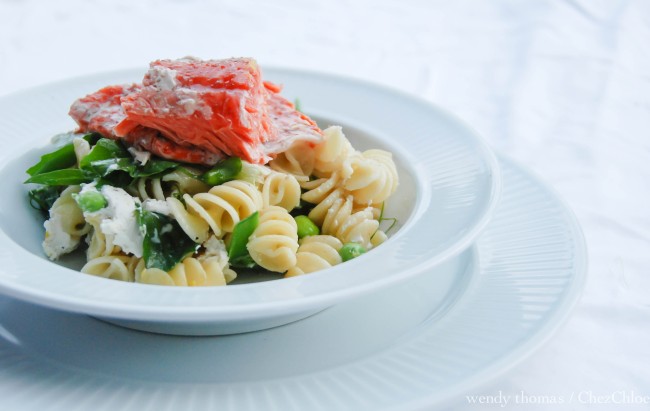